The once-a-year CIIE (China International Import Expo) is a great occasion for global automakers to show their freshest technologies and products to the whole world, especially the public in China. At this year’s CIIE, exhibitors generally show their appreciation for electrified achievements, while the things related to hydrogen are particularly highlighted.

Gasgoo will take you around the automobile exhibition area by this report.

Tesla once again owns a booth at the CIIE, for the fourth year in a row taking part in this splendid exhibition.

This time, Tesla “moved” its Gigafactory Shanghai into the CIIE by unveiling how vehicles are manufactured through videos and displaying many full-sized objects, such as batteries, electric motors, and the Model Y’s body-in-white,

Tesla takes the audiences around the factory by playing videos, through which viewers can learn the running processes at the casting, stamping, electric motor, battery, welding, general assembly, and painting workshops, as well as how the factory’s quality control system runs.

The Model Y’s body-in-white certainly grabbed the attention of plentiful viewers. Thanks to the 6,000-ton giant die-casting machine, the Model Y’s rear structure is integrated into a single piece, so that the weight of the underbody is reduced, the welding process is simplified, and the vehicle’s consistency is improved, a Tesla’s product manager said on scene.

Moreover, the U.S.-based EV manufacturer also showcased the localized advances of its charging network in China.

Toyota’s booth at the CIIE

Themed “co-building the community of shared future for human and natural life”, Toyota’s booth attracts audiences with its phased achievements to realize the full-lifecycle carbon neutrality and electrified products developed to serve the 2022 Olympic and Paralymic Winter Games in Beijing.

The Japanese automaker showcased at the CIIE three fuel cell vehicles models, including the MIRAI Ⅱ, the Coaster Welcab, and the Sienna Welcab.

The concept version of the Toyota bZ4X, which will be the first model in the BEV-dedicated bZ series, is placed at the booth as well. According to Toyota, the mass-produced bZ4X will be put into service in the Beijing 2022 Winter Olympic Games.

Toyota also demonstrates to the public the measures it adopts to push the all-around electrification process and contribute to the building of a low-carbon society, with FCV and BEV technologies as centerpieces.

For the sake of carbon reduction, Toyota said it has built solutions for all links through the product’s whole lifecycle, including the fuel manufacturing, the energy storage, the usage of cars, the recycling of scrapped vehicles and components, and the disposal of exhaust emissions.

For FCVs, Toyota is striving to improve the storage performance of hydrogen tanks, innovate in the technologies of hydrogen tank manufacturing, lessen the use of carbon fiber, and popularize FCVs. Besides, it is also teaming up with Chinese partners to research the methods for well disposing scrapped FCVs and explore the cyclic utilization of relevant core parts.

Toyota is also endeavoring to improve the recycling of BEVs and batteries. For instance, it installs solar cells at a car’s roof, bonnet, rear window, and other places to enhance the car’s range and fuel economy. To minimize the environmental burden caused by battery production and utilization, the automaker is working on building a system for recycling of battery materials.

At the CIIE, Nissan Motor showcased its newest advances
for electrification, powertrain innovation, and the introduction of
technologies and vehicle models in China under the “Nissan Intelligent
Mobility” vision.

Nissan Motor plans to introduce in China 9 electrified models by 2025, including 6 e-POWER-enabled ones.

The
Japanese automaker also displays the all-new X-TRAIL, the first SUV
built on the new CMF-CD platform. The model boasts the VC-Turbo 300
engine and many cutting-edge technologies such as the improved ProPILOT
driver assist system and the Nissan Connect 2.0 in-car infotainment
system.

The VC-Turbo engine is displayed at Nissan’s booth as
well. According to Nissan, it uses a multi-link system in place of a
traditional connecting rod to rotate the crankshaft, and an actuator
motor changes the multi-link system endpoint in order to vary the
pistons’ reach to transform the compression ratio. This makes it
possible to vary the compression ratio continuously as needed within the
range of 8:1 (for high load) to 14:1 (for low load).

Among the three complete vehicle models showcased at Honda Motor’s booth, the e:NS1 must assume the biggest significance.

The
e:NS1 is the first mass-produced model of the “e:N Series”, the
all-electric car lineup Honda launches for Chinese market. It will go on
sale in China in Spring 2022 as the pioneer to be followed by the other
nine “e:N Series” models, which will be introduced to the country in
next five years.

Additionally, Honda Motor also exhibits the New Accord Sport Hybrid and the 11th-generation Civic at the CIIE.

Hyundai Motor Group showcased at the CIIE its latest achievements in hydrogen and electrification, demonstrating its sincere wish to bring consumers in China all-new travelling experiences.

“Hyundai Motor will be supportive of China’s multi-channel roadmap for the development of new energy vehicles, insisting on pushing ahead with the two-pronged strategy focusing on both hydrogen and electric energy,” Li Hongpeng, Vice President of Commerce Hyundai Motor Group (China) Ltd., said at the exhibition.

At the CIIE 2021, Hyundai Motor displays a slew of hydrogen-based products and technologies, which were unveiled at the global virtue forum dubbed “Hydrogen Wave” in September to reveal the insight into the group’s future vision of sustainable hydrogen society.

The most eye-catching product at Hyundai’s booth should be the Trailer Drone, a hydrogen-powered container transportation system capable of operating autonomously with a double e-bogie configuration. With the number of intelligently packaged hydrogen tanks tailored to the journey profile, the flexible and efficient Trailer Drone ensures more than 1,000km of sufficient range from a single charge, comparable to existing container transportation systems.

Aside from mobility service, Hyundai Motor is also dedicated to employing hydrogen energy in production and living areas. The company spotlights its honeycomb-shaped fuel cell battery energy modular system, which is able to be stacked to offer outputs ranging from 500kW to 1MW, and usage has been suggested for even heavier applications like marine freight, or as a backup system for IT infrastructure.

The group presents at the CIIE the new rescue vehicle concept RHGV (Rescue Hydrogen Generator Vehicle), a vehicle powered by hydrogen that in addition to reaching unexpected and remote places, it acts as an electric generator to power zero-emission vehicles and other facilities. The RHGV is equipped with a portable charger that simultaneously offers 220 V single-phase and 380 V three-phase power supply.

The mobile charging system uses the proprietary fuel cell generator of HTWO, Hyundai Motor’s dedicated hydrogen fuel cell system brand, to charge not only household vehicles and facilities, but also high-performance all-electric race cars. It can generate up to 160kW of electricity and can fully charge two ETCR (Electric Touring Car Racing) vehicles—each equipped with a 65kW battery—simultaneously within an hour. The automaker announced in June the HTWO would provide its fuel cell generator to the ETCR, the world’s first all-electric touring car race category.

The China-made NEXO fuel-cell SUV made its premiere at the CIIE. Equipped with Hyundai’s self-developed fuel cell system, the NEXO has zero tailpipe emissions and can even improve air quality as it drive. Its air filter removes micro-particulates and expels unused air to offer purified air the fuel cell stack requires.

As for the achievements for electrification field, the Group exhibits the E-GMP (Electric-Global Modular Platform), a dedicated platform made especially for EVs. It comprises the chassis of the vehicle including the battery, motor and power electric system, and its scalable wheelbase allows it to form the backbone of many different types of vehicle.

Moreover, two all-electric production models riding on the E-GMP platform, namely, the IONIQ 5 and the Kia EV6, are exhibited together at the CIIE.

Among a number of vehicle models Ford Motor displays at the CIIE, the Mustang Mach-E should be the most high-profile one. It is the first pure electric version of the legendary Mustang and also the first all-electric SUV of the company’s product lineup. With the significant model hitting the market in China in April, Ford is speeding up its transition to electric vehicles in the country.

Another bright spot of Ford’s exhibits is the all-new Ford EVOS, the first strategic model under the “Ford China 2.0” plan. It carries Ford’s all-new smart cockpit, which boasts a 1.1-meter-wide console-mounted display that comes with the Ford SYNC+2.0 infotainment system and the virtual assistant “VPA”.

What’s more, the automaker displays the Ford City Insights Platform, a digital tool Ford designs to comprehensively simulate the urban transport system and evaluate various mobility concepts. The tool comprises a full set of advanced software, allowing cities’ regulators to easily visualize and understand their entire transportation system so they can make better decisions for their communities today and in the future, and research and verify diversified innovation mobility solutions.

General Motors’ booth draws a lot of attention greatly thanks to the GMC Hummer EV pickup, which was for the first time showed to the audience in China.

The Hummer EV helps General Motors carve out a road of “pure-electric and zero emission” in the pickup segment. It can hit 100km/h in only three seconds and has a range of up to 560km. The special CrabWalk mode can utilize the off-roader’s four-wheel steering system to make the vehicle move diagonally, rather than circularly.

The Hummer EV is built on the Ultimum EV platform, which is also presented at the CIIE. The platform features the highly integrated “eight-in-one” electric drive system, three solutions for battery mix, and a “smarter” battery management system capable of higher energy density and simpler arrangement of thermal management system.

According to SAIC General Motors, the Cadillac LYRIQ, the first SUV built on the Ultium platform, will be available for preorder this year and is expected for delivery in mid-2022.

The all-new EQS is a flagship model built on Mercedes-Benz’s architecture dedicated to large-sized full-electric vehicles. It boasts a super low drag coefficient of 0.2.

The German luxury carmaker sets up a special area themed sustainable development to offer viewers the immersive visiting experience by virtue of videos and the wrap-around exhibition layout. 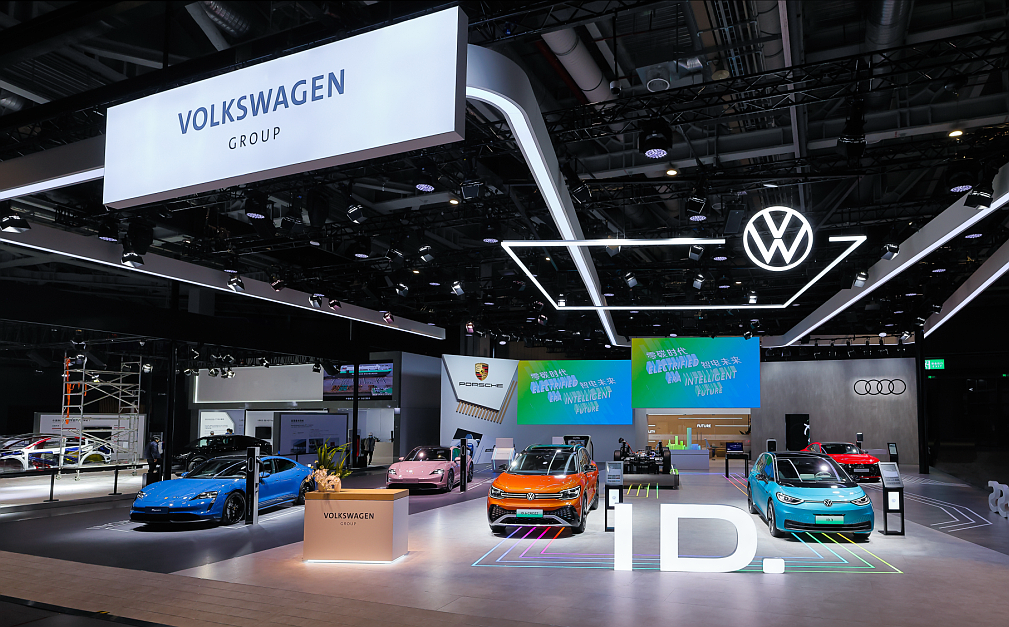 Models exhibited under Audi brand are the RS e-tron GT and the aforesaid full-electric luxury concept. Porsche displays the Taycan RWD and Taycan 4S, which are variants of its first all-electric sports car model Taycan.

All Rights Reserved. Do not reproduce, copy and use the editorial content without permission. Contact us: [email protected]