AppleInsider is supported by its audience and may earn commission as an Amazon Associate and affiliate partner on qualifying purchases. These affiliate partnerships do not influence our editorial content.

With CES 2022 in the review mirror, we walk you through the best MagSafe-compatible accessories that we tested at the annual tech show.

Kicking off our list was Hyper’s upcoming 4-in-1 wireless charging stand. This was announced before CES, launching as a Kickstarter as Hyper is prone to do. CES just happened to be our first chance to try the device out for ourselves. The company also told AppleInsider that, instead of the magnetic Qi charger they announced in the campaign, they plan to use an official MFi MagSafe puck instead in the final product.

That means they are upgrading the MagSafe charging to 15W, up from 7.5W, and will be certified by Apple. The MagSafe puck can pivot up and down to adjust the viewing angle, making it a great desktop companion.

Aside from the MagSafe and Apple Watch charging modules, there is a flat Qi charging pad and a smaller Qi charger designed for AirPods.

The new Hyper 4-in-1 MagSafe charger

The charger has dual inputs. There is both a standard DC barrel connector input and a more common USB-C PD input.

For travel, the metal stand can fold flat with the base for easy storing in your on-the-go bag. It feels premium, with solid weight and a metal body. The hardware combined with official Apple components will make this a very popular stand.

Handl is coming for PopSockets. This stylish accessory was previously connected to your iPhone with adhesive, but two new versions now rely, in part, on Apple’s magnetic connection system. 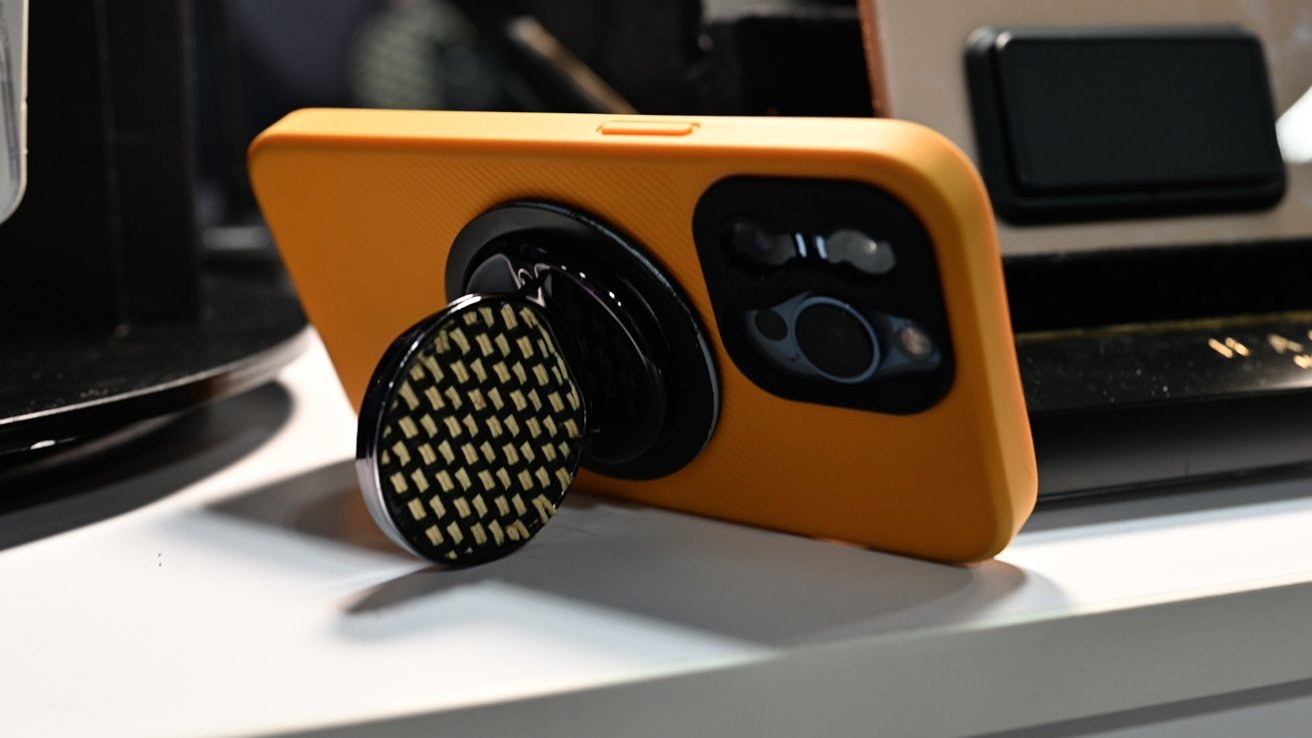 The HANDL grip for MagSafe

Each Handl grip connects with MagSafe and has a small micro-suction pad in the center that sits atop the iPhone’s Apple logo. The frosted back doesn’t allow micro-suction to stick on the pro iPhones, but the Apple logo is polished. This makes it the perfect location for the added adhesive for a reliable grip.

With Handl on your iPhone, you’re able to keep a better grip on the device or prop it up horizontally for watching videos. There are two MagSafe versions — one round, one rectangular — each with many styles.

Known for the LineDock, Line is out with its latest accessory for iPhone — the LineStand. 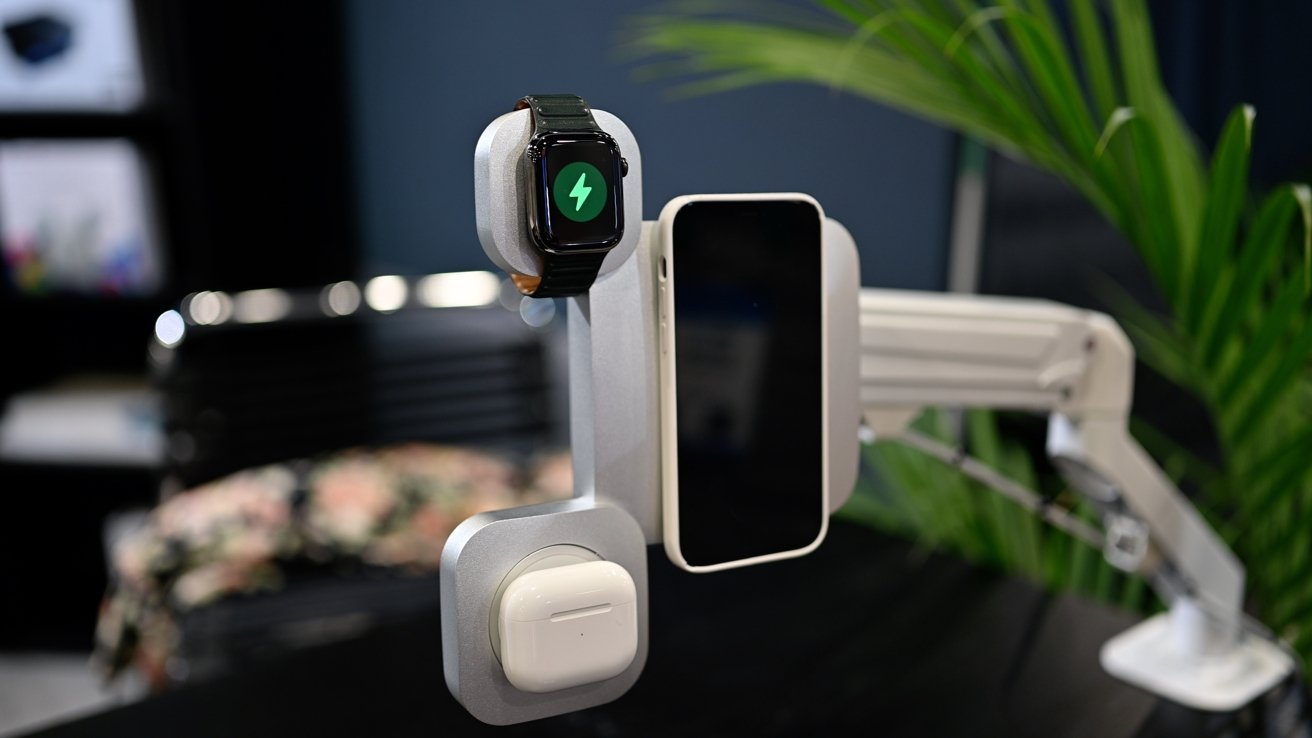 The LineStand is a low-tech way to power up your gear that frees up some desk space simultaneously. It is a CNC’d block of aluminum that will house your Apple Watch and MagSafe pucks. A standard VESA mount is used to hold the LineStand easily positioned above your desk, next to your monitor.

We love the looks of the LineStand, and Line tells us they are exploring the possibility of fully integrating the pucks for a future model rather than requiring users to provide their own. 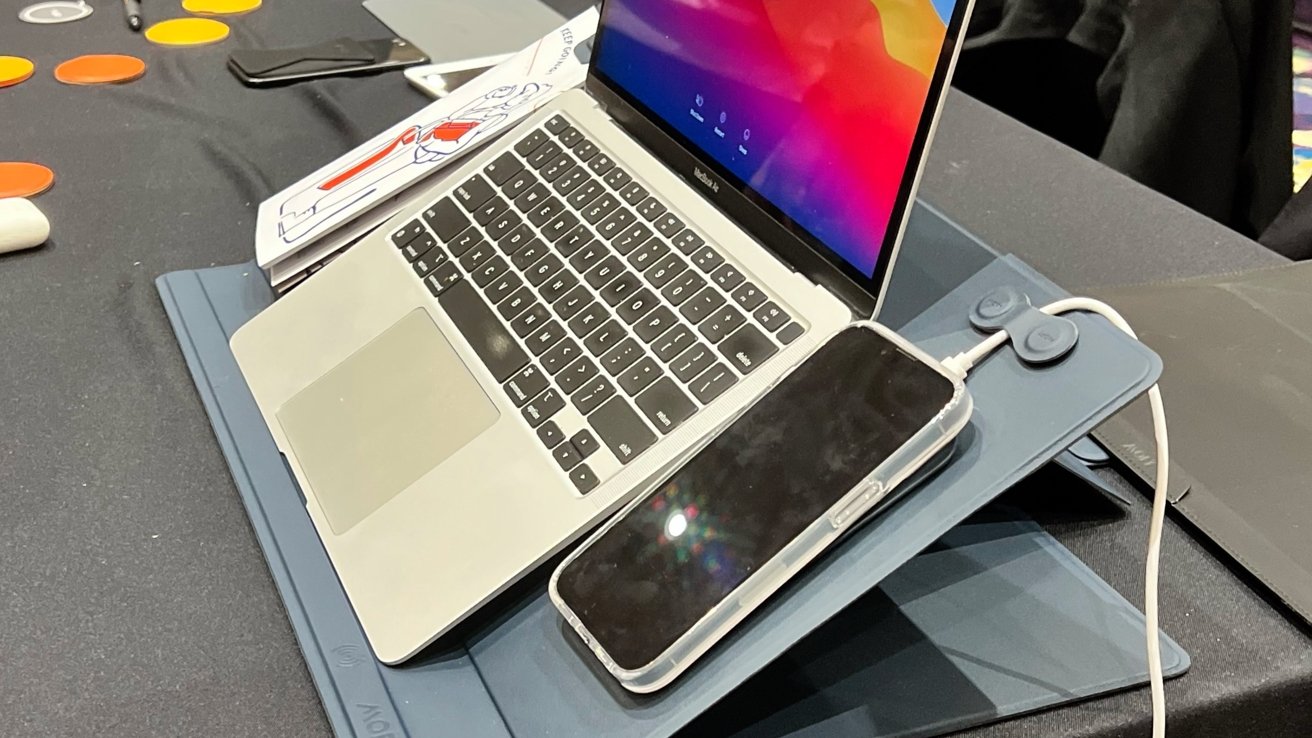 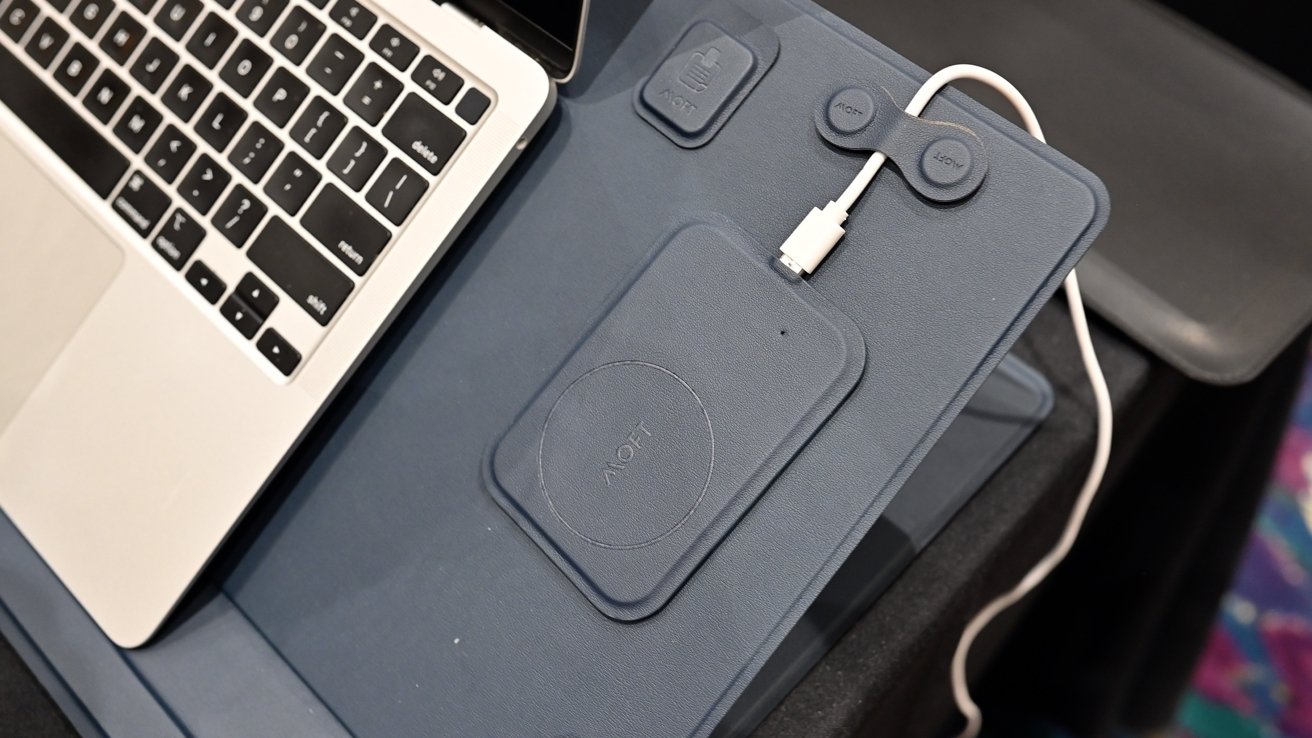 The MagSafe-compatible magnetic Qi charger is the star of the show. This Qi charger is very slim and can be placed anywhere on the Moft Smart Desk Mat’s surface. It is powered by a USB-C cable, routed off the side with magnetic cable organizers. Prices start at $128.

Scosche has a bevy of new MagSafe gear it demoed at CES 2022. We got an early look at the devices, but the company had to bail on its in-person showing due to Covid concerns. 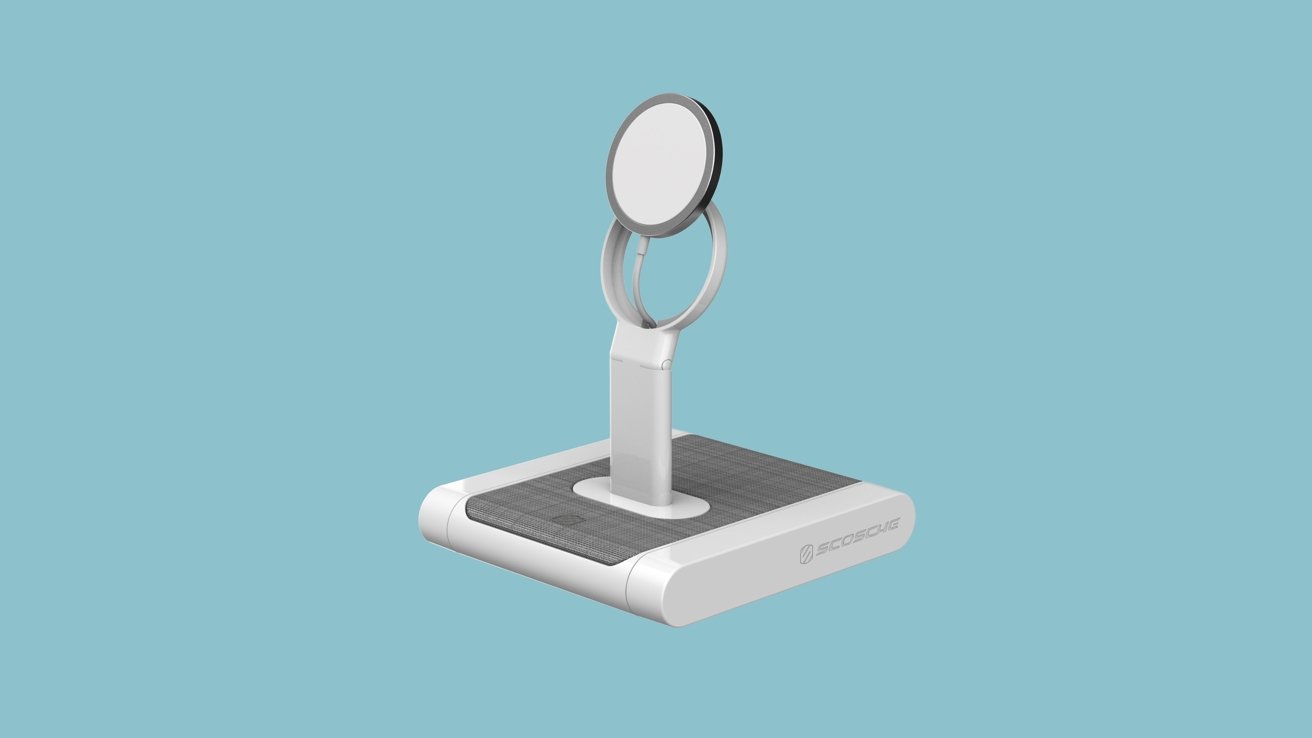 We were big fans of the Scosche BaseLynx when it debuted. It is a modular charging station that allows users to build the charger that suits their needs, choosing between wireless chargers, stands, or Apple Watch chargers. The company is adding to that list of modules with a new MagSafe stand.

This stand will fit your existing MagSafe puck, and the cable can be tucked away for a clean appearance. It connects with all existing BaseLynx modules and comes in white. 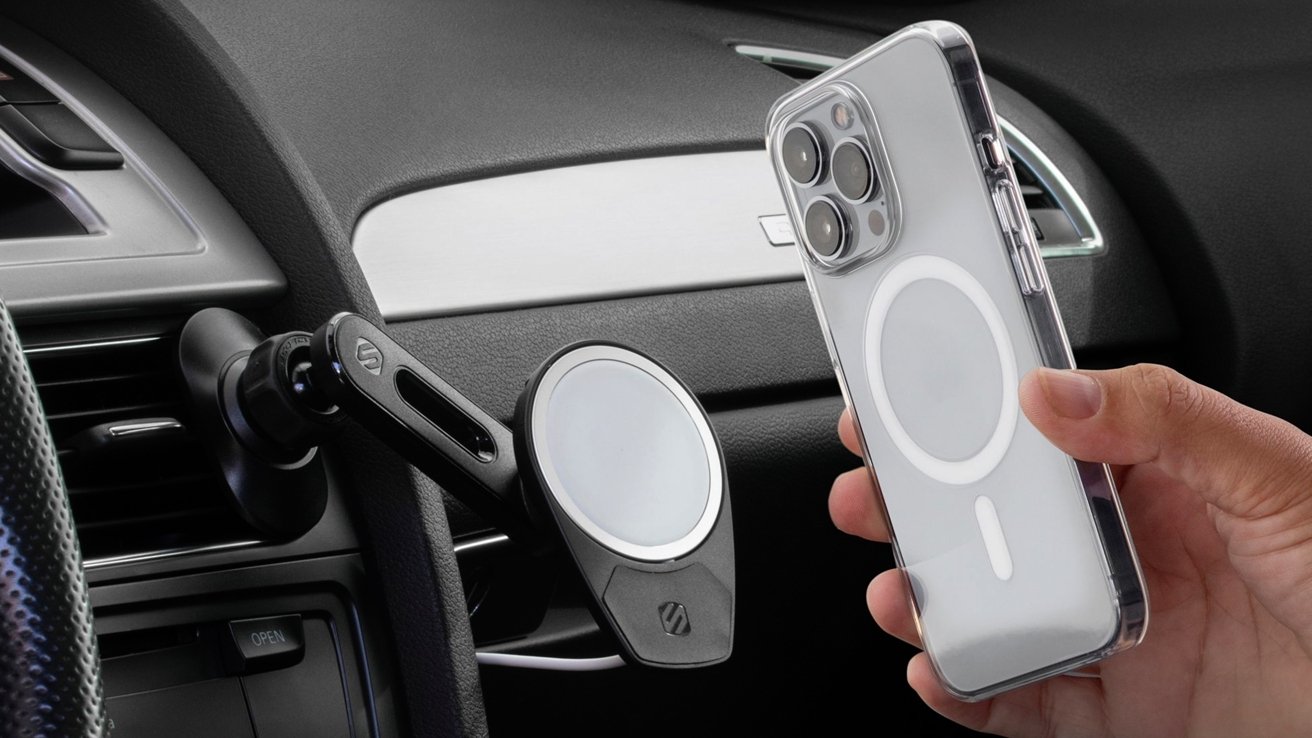 There are also a few car mounts making their debut in 2022. The Scosche MagSafe vent mount clips onto your vehicle’s air vents and articulates to position your phone to the side, preventing the air from being blocked or your phone from overheating when the heat is flowing. 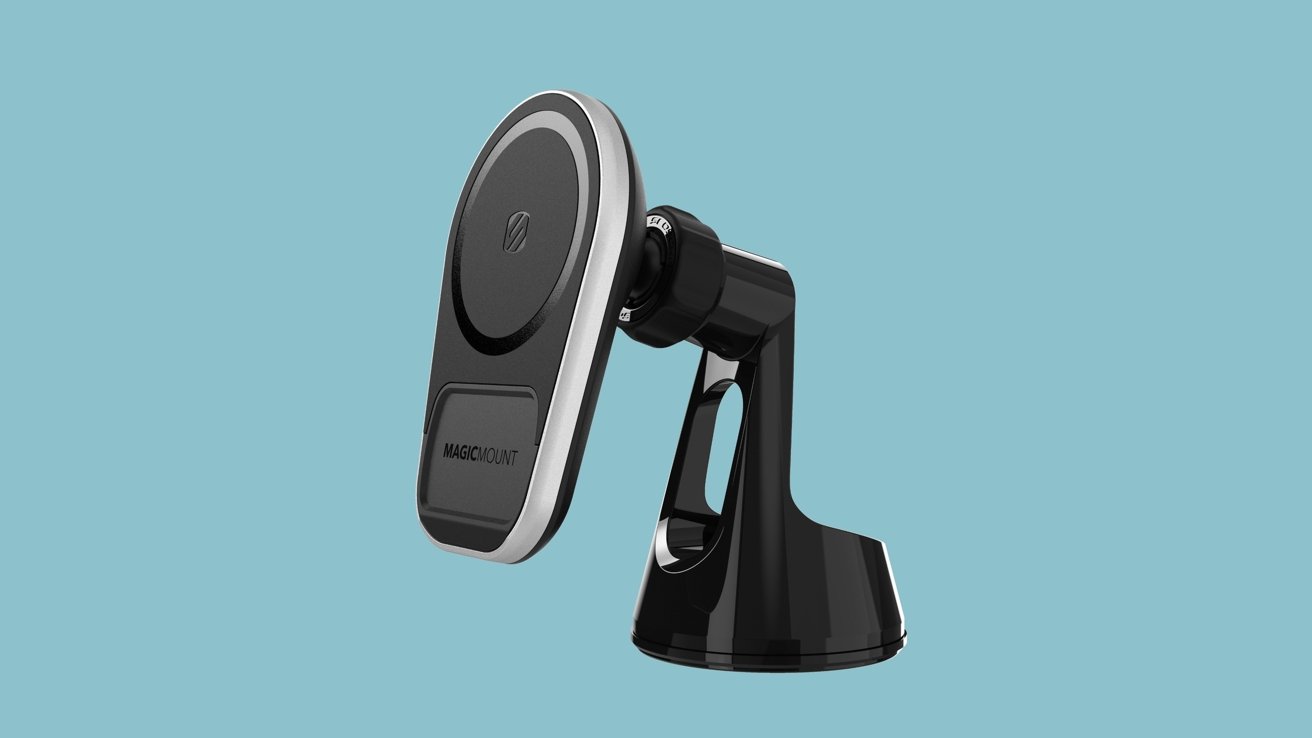 Finally, there is a pair of MagSafe mounts that hold steady by either mounting to your dash/windshield or slipping into an available cupholder.

Pout is a little-known brand that is bringing more of its products to the U.S. in 2022. On display at CES 2022 was the Eyes 14 monitor stand. 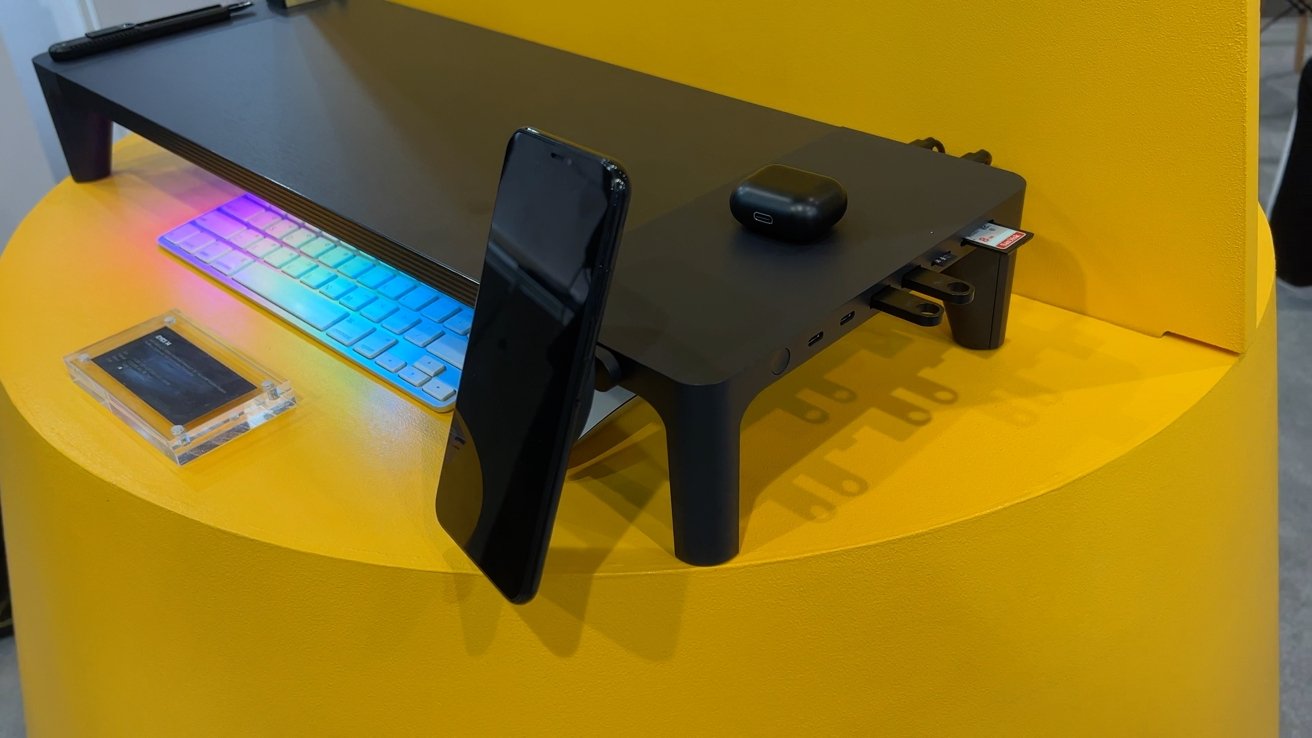 This desktop accessory can prop your monitor up, allowing for room underneath to store your keyboard, mouse, and other peripherals. They are illuminated with built-in RGB lighting, which is a pro or a con, depending on your point of view.

On the right side of the stand are additional I/O for your Mac, including USB-C ports, USB-A ports, and a pair of card readers. Finally, a magnetic MagSafe-compatible iPhone mount on the front will charge your iPhone while you work. 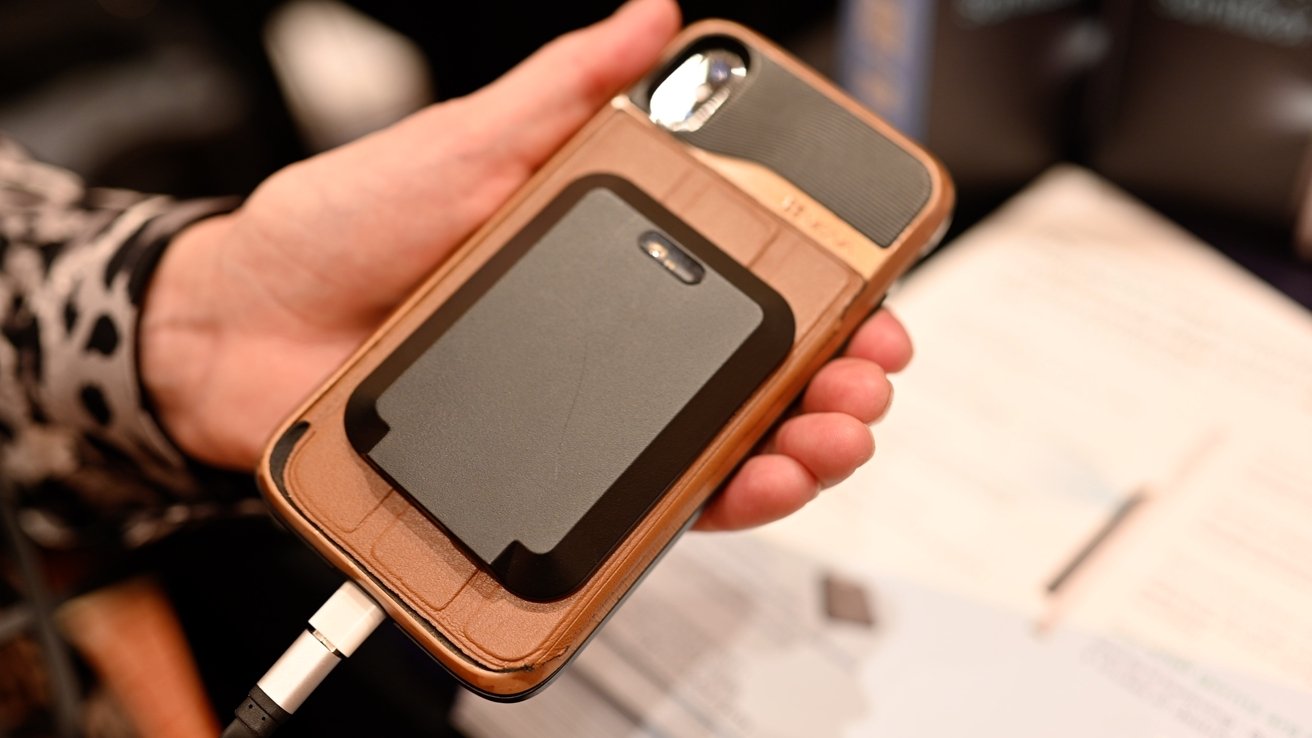 The UVCeed card is a unique MagSafe accessory used to sterilize surfaces. It is thin, barely thick enough to house the USB-C power input. MagSafe keeps it on the rear of your iPhone, which can be controlled from the accompanying app. 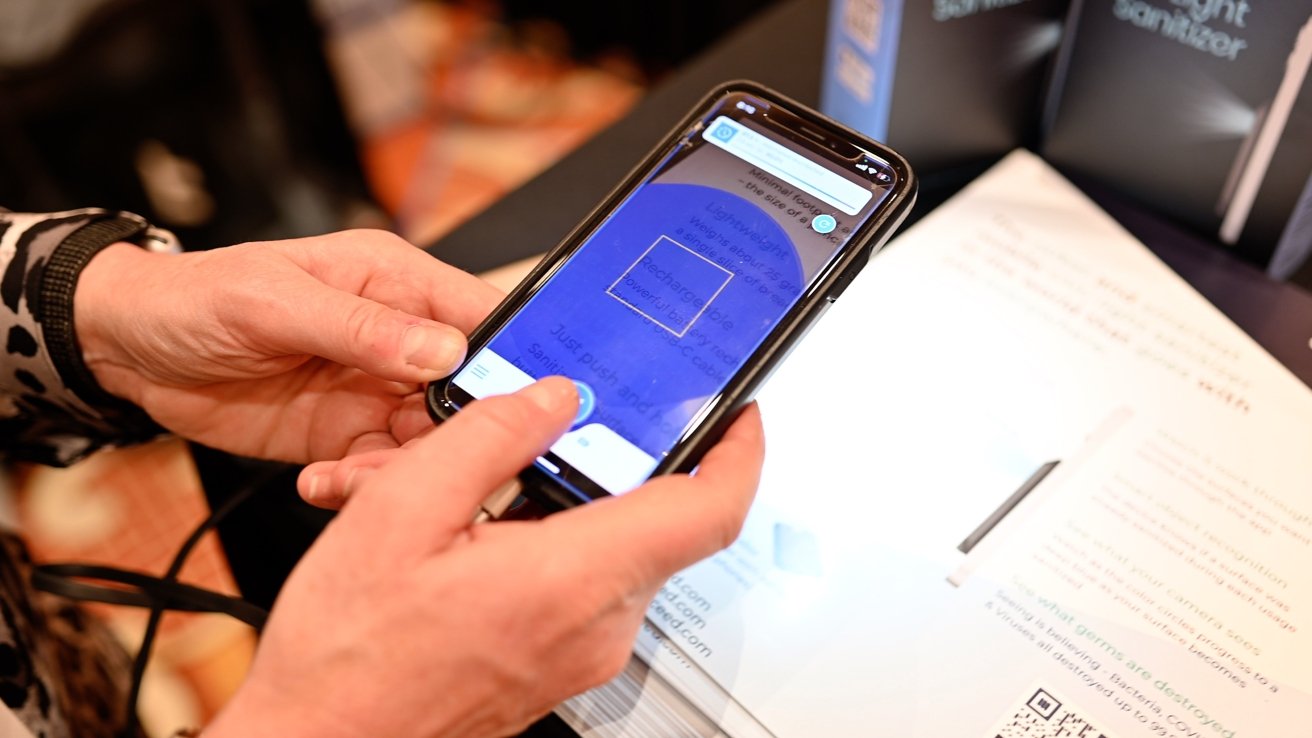 The app relies on augmented reality to help sterilize surfaces in front of you. Moving the camera around will overlay colored circles over the surface to denote what has already been sterilized. The circles will get darker, based on how long the light stays in one place.

Afterward, it will give you a summary of the average number of germs you’ve killed — including COVID.

For protection, the app will detect human skin to prevent UV damage. 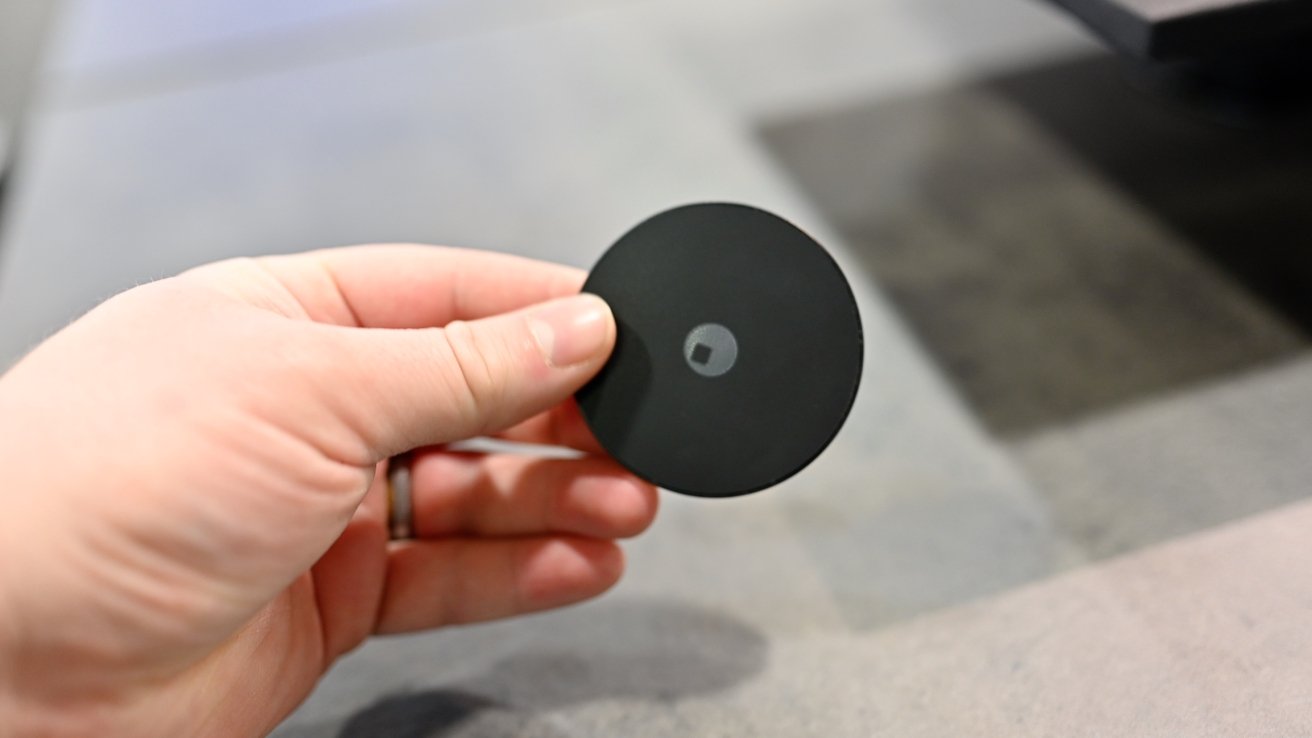 Rolling Square has a simple but vital MagSafe accessory. The company debuted a new MagSafe car mount that can be affixed using the adhesive on the back.

Rather than being made out of plastic, this mount is a strong metal puck with a silicone outer surface to keep your phone from slipping free. 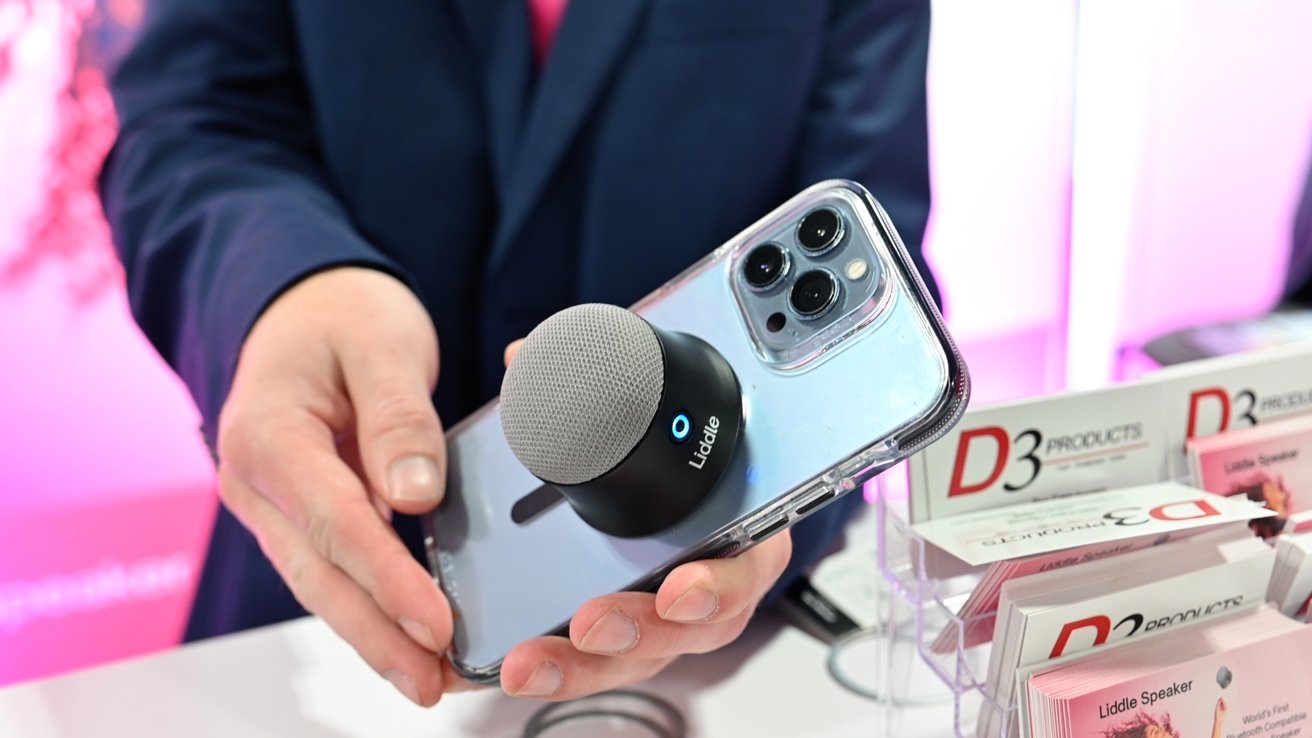 Then we have the speaker from Liddle. This miniature speaker connects to the back of the iPhone 12 and iPhone 13. It’s louder than the iPhone speaker and doubles as a stand when in landscape mode.

If you pick up two Liddle speakers, you can pair them together for improved stereo sound.

Products Chosen and Put to Work by Hearst Autos